This month on Netflix: John Leguizamo's Latin History for Morons. I was there. It was great. 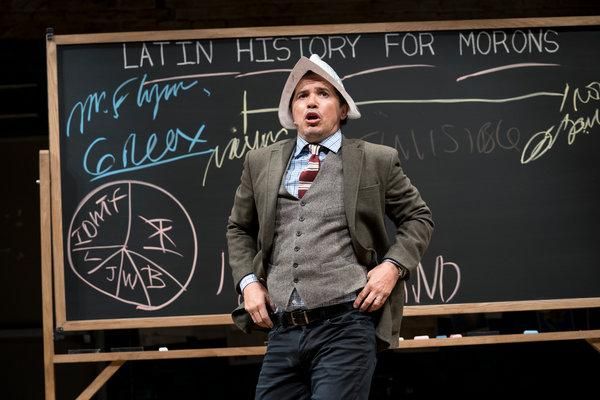 Last June, I sashayed on down NJPAC in downtown Newark to see one of my favorite artists, John Leguizamo.  A whole generation of folks know him as the voice of Sid, the prehistoric sloth and co-star of the Ice Age animated movie franchise by Dreamworks Studios.  He's got well over 140 movies and TV shows under his belt including movies like Carlito's Way with Al Pacino, and HBO's Spawn series.  In 1995 he had his own series on Fox called "House of Buggin".. .I love that title still.....???. If you're were a culturally hip New Yorker though, who was out "runnin' these screets" in the 90's , than you know that John Leguizamo is a New York playwright, actor, stand up comedian, monster storyteller and master of the one man show stage format.  When I was a student at the American Academy of Dramatic Arts, I was able to see one of his early shows on Broadway, "Freak".  It was brilliant, I was hooked from then on.   Like all of his one man shows , Freak, Sexaholics, Spic-o-rama, Mambo Mouth, and now The History of Latin America for Morons, they are all autobiographical and incorporate his life growing up in New York, his Puerto Rican heritage, his family, his issues and insights into race and culture, his world view, and the characters he met along the way in his life.  John usually  portrays multiple characters. They're always amazing and authentic, rooted in truth, usually outrageous and straight up funny.

Latin History for Morons is a little different.  John walks on stage into a classroom set,  like Mr. Leguizamo, the really hip substitute teacher, that you know is going to hip you to some real shit, because when he's not teaching he's an artist, or a political activist for most of his week and isn't stuck in the politics of your school's curriculum.  You know that dude....My guy in Washington, D.C., was Mr. Michelin, but I digresss......It starts with Mr. Leguizamo explaining to us that his son was bullied at his very fancy private school and he comes to realize that the boy is being taught absolutely nothing about the important and impressive history of Latin people particularly in the Americas nor the history of what we Americans call "Indian" peoples, the Mayan, the Aztects, the Taino, for example. That's where it starts, but from, there Mr. Leguizamo goes in.  It's real history and it's backed by books and noted authors he references and recommends that we all familiarize ourselves with throughout the show. It just so happened that the show my wife and I attended was one of 3 shows being taped for Netflix, so you'll get to see the show almost exactly as we saw it.

I think of myself as a person who takes it for granted that history is always rich and important from every culture, that so much of the non-European history of humankind is relegated to the scrap heap in our education system in America, solely because Europeans and their thinking have held most of the power in recent history.  I accept reluctantly, that the American history that is taught in high school is often largely incomplete,  skewed, or distorted in favor of a White Anglo-Saxon world view.  I also believe the internet has changed learning forever and while many of us are doing the digging and getting wiser, we are also inundated with video generated by people who are not scholars, have not done the work and are spewing falsehoods that are as bad or worse than the incomplete history lessons I was referring too. Some of what I've seen on the web that is meant to broaden our perspective and challenge the prejudices in our education is just garbage.   I'm not demonizing White Europeans, it's a power thing, a human fault.  Historically whoever is in power tries to diminish the importance of everyone else culture.  I seriously doubt the Egyptians educated their citizens on the history of the cultures that came before them or the culture of the peoples they took as slaves.  I like to believe we're getting better though.  Having said that I try to educate myself about all cultures.  I thought I knew a lot about Latin History being educated in a English-Spanish bilingual school from 1st to 6th grade, being a fluent Spanish speaker and having been immersed in Latin American culture for most of my life. Well, maybe I am, but  I still learned so much that night. It was sobering, disturbing, enlightening and as always with John Leguizamo, crazy funny.  Check it out.